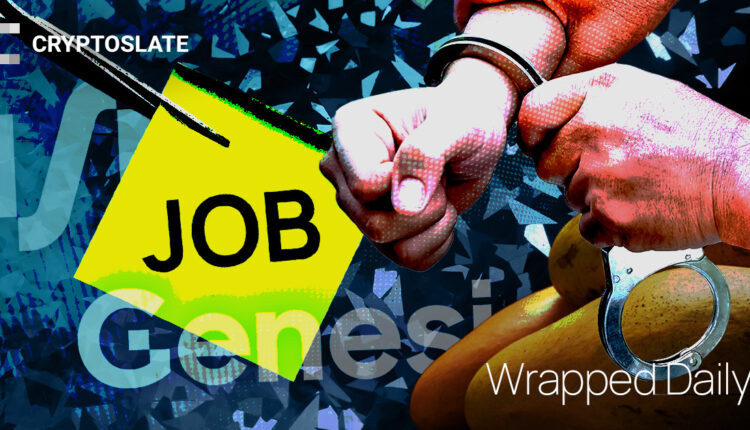 The biggest news in the cryptoverse for Jan. 5 saw two notable companies, Silvergate and Genesis, lay off a large portion of their staff. Meanwhile, authorities ordered the detention of Mango Markets hacker Avraham Eisenberg while the SEC took action against a scam called CoinDeal. Plus, new research about the behavior of Bitcoin whales.

Silvergate Capital was forced to sell assets at a loss in order to cover an $8.1 billion bank run. In response to the crisis, Silvergate laid off approximately 200 employees — 40% of its staff — and announced plans to “pare back its businesses,” according to The Wallstreet Journal.

Genesis sacks 30% of workers, may file for Chapter 11 bankruptcy

Beleaguered crypto lender Genesis has sacked 30% of its workers and may file for bankruptcy, The Wall Street Journal reported Jan. 5, citing people familiar with the matter.

Genesis previously laid off 20% of its workforce in August 2022, citing market conditions.

In a Jan. 4 statement, Genesis CEO Derar Islim gave hints about this new development. Islim wrote that Genesis was “reducing costs and driving efficiencies” in all of its businesses.

A U.S. district court has ordered the detention of  Mango Markets’ exploiter Avraham Eisenberg over concerns that he may flee before the trial is finished.

Avraham Eisenberg was arrested on Dec. 27 for allegedly exploiting Mango Markets to steal assets worth approximately $110 million. The accused has publicly admitted to perpetrating the attack.

A recent study shows that the most common reason for cryptocurrencies dying off is the lack of trading volume with a rate of 66% while being a scam and hosting unsuccessful ICOs are the second and third most common reasons for failure.

The U.S. Securities and Exchange Commission has filed charges against eight individuals involved in a crypto scheme called CoinDeal, according to a Jan. 4 press release.

CoinDeal’s perpetrators raised over $45 million by selling unregistered securities to investors. They promised high returns and insisted that CoinDeal’s blockchain technology would be sold to wealthier buyers for trillions of dollars.

Singaporean crypto exchange Pionex announced that it removed Huobi’s market-making funds from its platform due to the gradually declining trading activity on the exchange.

Pionex is a crypto exchange that allows its users to automate their trading activities by using 12 built-in trading bots. It currently has 379 tokens available for trading. The exchange was banned by South Korea on Aug. 18, 2022, for being unregistered.

Glassnode data analyzed by CryptoSlate showed a divergence between super whales and retail, with the former remaining in aggressive accumulation mode going into the new year.

The Accumulation Trend Score (ATS) looks at the relative size of entities that are actively accumulating or distributing their Bitcoin holdings.

The ATS metric uses a spectrum between 0 to 1. A reading closer to 0 indicates distribution or selling. While a score closer to 1 shows accumulation or buying.

Analysis of the chart below showed that substantial accumulation happened during the FTX collapse around early November 2022, even as the Bitcoin price reacted negatively to the news.

This suggests that investors, as a whole, saw value in buying at discounted prices.