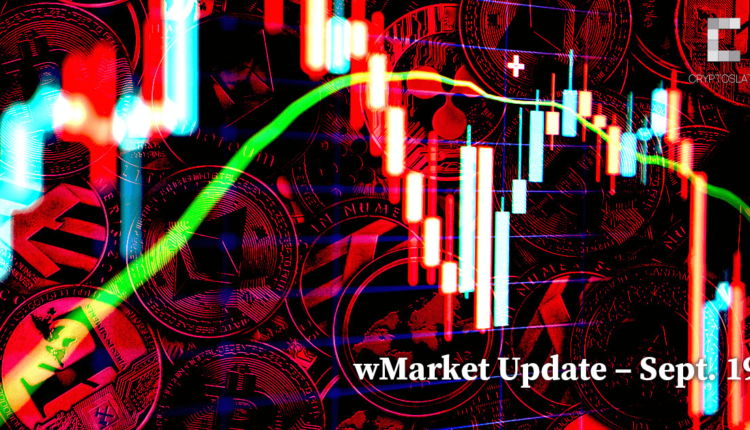 The total cryptocurrency market cap saw net inflows totaling $32.1 billion. As of press time, it stood at $935.61 billion, up 3.5% over the weekend.

After a period of major selling, the top 10 cryptocurrencies all posted gains over the last 24 hours, with XRP leading the pack at 7.2%. Meanwhile, Polkadot brought up the rear with a 1.8% gain.

A weekend sell-off spilled into Monday, dropping BTC to as low as $18,200. This was attributed to the market pricing in an expected 75-100 basis point hike by the Fed this week. The market leader bounced back at lunchtime (UTC) to recover Monday’s losses.

ETH bulls brought some respite from the continual slide seen post-Merge. Price action largely mirrored that of Bitcoin, with $1,290 providing multiple continual instances of support on the hourly chart before a recovery set in on the morning of September 19.

USTC grew 16.51% over the past 24 hours and was trading at around $0.03444 at the time of publishing. The rebranded UST stablecoin, at the heart of the Terra implosion, is still yet to re-peg, despite today’s gains. Its market cap stood at $338.08 million.

PEOPLE is up 14% over the last 24 hours to trade at $0.02218 at the time of publishing. The project intended to purchase the original U.S Constitution at Sotheby’s but lost out to Citadel CEO Ken Griffin. It’s unclear why PEOPLE spiked today. Its market cap stood at $112.23 million.

REFF sunk 7.4% over the past 24 hours to $0.00471 at press time. The project suffered controversy involving Alameda Research in March 2021, and its price has yet to recapture its former glories pre-controversy. Its market cap stood at $94.54 million.

TON plunged 5.58% in value over the reporting period to trade at $1.47837. After being sued by the SEC, the Telegram project was handed over to the community. The token is down 78% over a year. Its market cap stood at $1.81 billion.