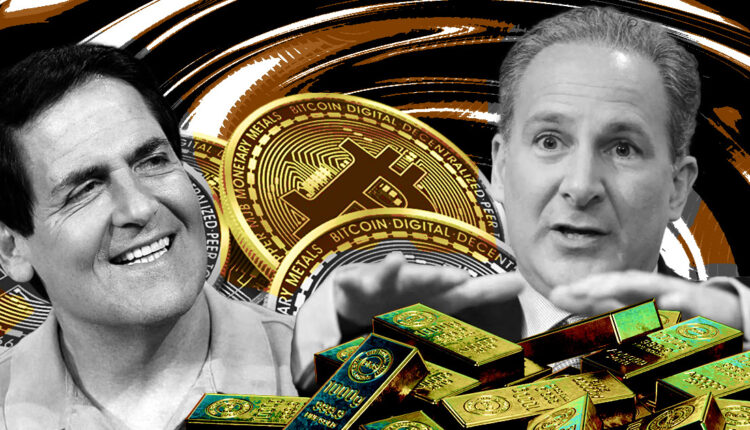 Euro Pacific Capital CEO Peter Schiff fired back at Mark Cuban in response to the entrepreneur’s previous comments on gold, saying he does not understand precious metal investing.

Cuban says he will buy more Bitcoin if the price drops

During a Club Random Podcast posted on Dec. 26, host Bill Maher touched on the long-running Bitcoin vs. gold debate by weighing in with his preference for the latter.

The billionaire owner of the Dallas Mavericks responded by saying, “I want Bitcoin to go down a lot further so I can buy some more.” Cuban added, “If you have gold, you’re dumb as f*ck.”

The ensuing debate saw Maher react by saying gold “never goes away” and “hedges against everything.” Not to be outmaneuvered, Cuban expressed doubt over the accuracy of the last statement.

The Shark Tank host pointed out the differences between paper and physical gold, saying most gold investors fall into the former category and do not own the physical bar.

Further, in a hypothetical SHTF scenario, the safe storage and custody of gold becomes all the more tricky.

“if everything went to hell in a hand basket and you had a gold bar, you know what would happen? Someone would beat the f*** out of you or kill you and take your gold bar.”

Reflecting on the back and forth, Schiff waded in by predicting a further price crash for the leading cryptocurrency.

With that, he attacked Cuban over his “lack of understanding” of Bitcoin and gold. He added that the billionaire’s fortune is evidence that understanding money is not a prerequisite to accumulating it.

Year-to-date, Bitcoin has lost 59% of its value. By contrast, a strong rally from November onwards sees gold post a YTD performance of +1.2%.

Some investing experts, including CIO at Swiss Asia Capital, Juerg Kiener, predicted continuing macro uncertainty will lead to a strong gold performance in 2023.

ProtonMail creator unsure whether his firm will continue to hold Bitcoin