Is the crypto bear market here? 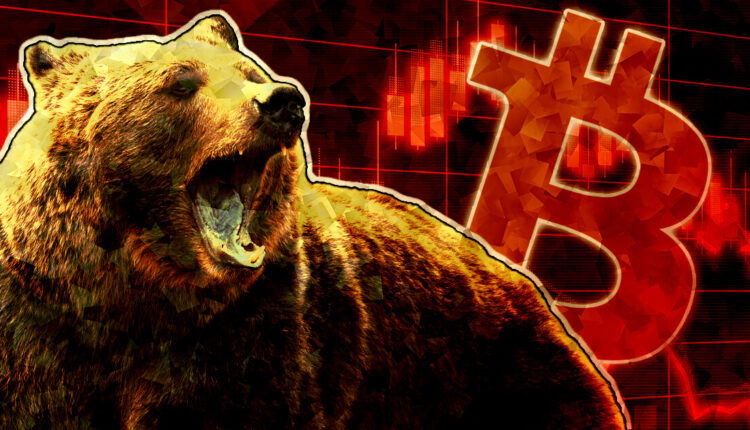 Crypto price action for the last month or so has hit a noticeable lull. The euphoria of November 2021’s highs now seems a distant memory. With that, talk of the onset of a new bear market is back on the agenda.

However, despite the lull in price action, at this point, there is ongoing debate regarding whether the bear market is back or not.

This is likely because a universally accepted definition of a crypto bear market does not exist. Nonetheless, borrowing from the TradFi definition, crypto research platform Mosiac define it as a 20% or greater drop in price for more than two months.

“we define a bear market as a minimum of a 20 percent drop in price lasting for at least 2 months in time.”

Based on the arbitrary starting point of November 10, 2021, when the total crypto market cap was $2.9 trillion, by the TradFi definition, we entered the bear market on January 10, 2022.

The last bear market, which ran from December 2017 to December 2020, could be described as a period of deep soul searching for crypto investors.

A sharp decline in on-chain activity characterized it. For example, Bitcoin’s confirmed daily transaction count from December 2017 saw a steep drop to bottom at 148,000 transactions in March 2018.

More apparent than that were the frequent announcements of firms closing their doors for the last time. While some were scams taking the opportunity to disappear into the night, there were also legitimate firms that couldn’t survive under the brutal conditions.

A notable example of this was Korea’s third-largest exchange at the time, Coinnest, which said its closure was the natural result of the decrease in trading volume.

But perhaps the most memorable event of last crypto winter was Bitcoin’s plunge to $3,100 in December 2018; this represented an 85% drop from the $20,000 top 11-months prior. The path to $3,100 was laden with heart-wrenching double digits swings to the downside.

While there have been significant downside swings post-November 2021, none have been as stark as those witnessed during Bitcoin’s descent to $3,100.

Some may take this as evidence that we are not in a bear market. But there’s also the possibility that the bear market is here. However, the presence of institutional investors is acting as a counteracting force to some degree.

The effect of institutional investors and corporations and the shifting narrative

According to buybitcoinworldwide.com, institutions, which consist of ETFs, countries, public corporations, and private corporations, currently hold $60 billion in Bitcoin. This equates to 1,565,447 BTC or 7.5% of the circulating supply.

Data shows that 62% of Bitcoin in circulation hasn’t moved in more than a year, and less than 15% is actively traded on exchanges. This suggests investors, whether retail or institutional, are investing for the long haul.

“Bitcoin is no longer being used for trading or as a way to move capital into other crypto assets. Instead, it’s being accumulated for the long term.”

The shift in narrative from trading to store of value, in conjunction with the growing presence of institutions, makes this cycle different from those previous. This line of reasoning supports the view that, over time, volatility will smooth out, and drops in price, to the extent seen during last crypto winter, will not be as severe.

What’s frustrating about the current situation is that more institutional money is waiting in the wings. David Mercer, the CEO of LMAX Digital, estimates that at least 500 companies are ready to invest in Bitcoin.

However, unlike retail investors, institutions face several barriers to adding Bitcoin to their balance sheets. Chief among which, according to Mercer, is the lack of regulatory clarity.

Without a defined legal framework in place, institutions run the risk of violating future rules that may take effect. The outcome is money waiting for regulators and lawmakers to do their job.

Are we in a bear market?

Huobi co-founder Du Jun told CNBC that, while it’s hard to predict prices, given the current macroeconomic and geopolitical situations, he thinks we are now at the early stages of a bear market.

His reasoning came down to the historical patterns of bull and bear cycles around the Bitcoin halving, with the next one due in 2024.

And while the TradFi definition of a bear market supports this view, it is also important to point out that volatility in TradFi is not as extreme as in crypto. As such, applying TradFi standards to cryptocurrency may be the wrong call in this case.

If crypto bear markets were defined as a 50% or more significant drop in price for more than two months, then based on November 2021’s market cap high, we are still technically in a bull cycle.

The post Is the crypto bear market here? appeared first on CryptoSlate.