What will the FED decide today? Last chance for interest rate hikes before 2 month hiatus 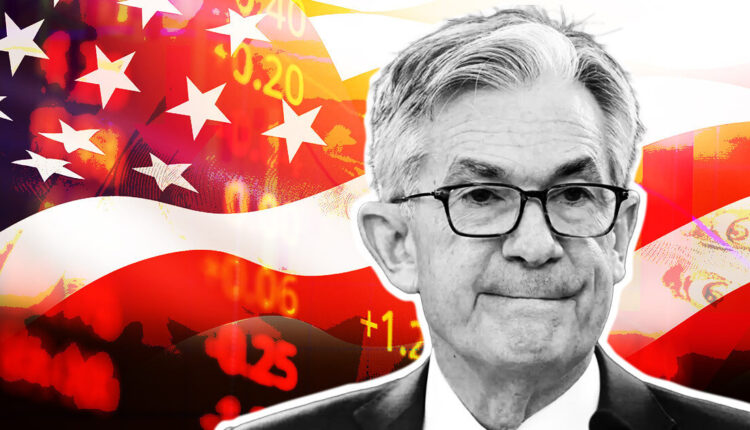 The Federal Reserve has its last FOMC meeting on July 27 before it breaks for 2 months. All eyes are on whether FED chair Jerome Powell will follow the market consensus of 75 basis points (bp) or look to a more aggressive 100bp as inflation continues to soar.

The FED’s interest rate decision is expected at 2 PM ET on Wednesday, with the GDP data coming at 8.30 AM Thursday.

According to a ZeroHedge preview of the FOMC meeting and economists surveyed by Reuters, there is “only a 10% chance of a 100bp move.” The economists surveyed see the July 27 meeting as the peak hike for inflation, with increases slowing to 50bp in September and 25bp in November.

The FED meeting comes just days after the White House looked to publicly redefine the commonly accepted method of establishing when an economy is in a recession. Data on GDP in the US is expected Thursday, which could confuse the markets should the information show a two-quarters decline in GDP.

Two-quarters of negative GDP growth is often cited as the definition of a recession. However, the current White House administration chooses not to use this metric. Metrics from “the labor market, consumer and business spending, industrial production, and incomes” will instead be added to the data to create a “holistic” view of the health of the economy.

Market analysts and commentators such as Guy from Coin Bureau expect “some market turbulence” Wednesday ahead of the FED meeting.

Interest rate decision today. The last opportunity for the Fed to bring down inflation before their 2 month holiday.

“equity markets “may be trying to get ahead of the eventual pause by the Fed that is always a bullish signal. The problem this time is that the pause is likely to come too late.”

The attempt to “get ahead” could be partly responsible for the recent uptrend in crypto prices. Bitcoin broke $24k on July 20 but has since been in decline into the FOMC meeting Wednesday. At the time of writing, Bitcoin is at $21.3K, up 3% daily.

Across the broader market, oil prices rose ahead of the meeting after a report revealed a drop in crude oil inventories in the US. The S&P rose 5% in July, indicating that sentiment may be switching towards a more bullish outlook.

CNBC reported that Gold prices could see volatility as an analyst from Standard Charter said, “assuming the Fed hikes by 75 bps in July, we believe the bulk of the near-term downside risk has been priced in; but the longer-term trend is still to the downside.”

Alongside the FOMC meeting, companies with combined valuations of $4 trillion — including Meta, Boeing, Spotify, Shopify, and Upwork — are also slated to report second quarter earnings on July 27

There’s over $4 Trillion worth of companies reporting their earnings today, a FOMC/Fed meeting & rate hike tomorrow, and Q2 GDP numbers released in 2 days (which will confirm the recession).

Markets could get shaky in the short-term, brace yourself.

It is safe to say there is mixed sentiment within the global markets. How the crypto industry will respond is still to be seen. The price of Bitcoin has reached its lowest correlation with the Nasdaq since the start of the year. Amid expected market volatility, Michael Saylor candidly reminded the world that “Bitcoin never misses earnings.”

Looking at data related to treasury yield inversions, Charlie Bilello, CEO of Compound Capital, believes a 75bp is already priced into the bond market. Given that Bitcoin has never experienced a global recession or soaring inflation, it isn’t easy to ascertain whether the same is true for crypto.

After the previous FOMC meetings this year, Bitcoin has fallen in the days following. However, as the correlation with the stock market declines, the possibility of breaking the trend increases. There will not be another FOMC meeting until September, so we could see inflation expectations for the next two months priced into Wednesday’s decision. Markets will then be left to their own price discovery for the summer without the intervention of the FED.